Last month we could see a very nice piece in The Guardian about larp called Beyond Dungeons and Dragons: can role play save the world? written by Tash Reith-Banks.

The article featured a bunch of larps such as the Jane Austen inspired Fortune & Felicity, The Quota which is centers around the refugee crisis and Halat Hisar which I have written about earlier.

“But can larps really be transformative? Andreas Lieberoth, associate professor of education at Aarhus University in Denmark, believes so. He says: “The more I study larp and the learning sciences together, the more I become convinced that larps can hold immense educational potential.”. And learning though role play is not a modern phenomenon, he stresses.”
Beyond Dungeons and Dragons: can role play save the world?

It also featured the larp Just a Little Lovin’ designed by Hanne Grasmo and Tor Kjetil Edland. I produced the second run which was held in Sweden 2012 and have helped out the two danish runs after that (2013 and 2015). During the last run in a also took photos and one of them was picked up by The Guardian for the article. I think the photo the chose really captures themes of the larp which centers around a gay community in the early 80’s New York that is hit by the aids crisis. A new run of the larp is set for june 2018 in Finland. 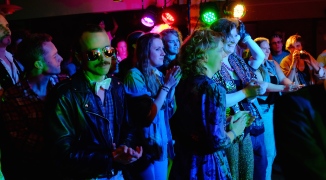 The rhetorics of Nordic larp often imply that role-players play in an intuitive fashion guided by the character, rarely or never contemplating their actions during the game. In reality, however, we are often keenly aware of what we are doing as our characters and why. This paper explores the practice of making in-character decisions based on off-game reasons – also known as steering.

The Art of Steering – Bringing the Player and the Character Back Together by Markus Montola, Jaakko Stenros & Eleanor Saitta.

Baader-Meinhof Experiment at Riksteatern 2010 during A Week in Stockholm. Ingame. Photo: Gabriel Widing.

Martin Nielsen held a keynote entitled The Chamberlarp Revolution at Knudepunkt 2015 from which he now has released the text. Martin talks about the history and future about formats for short larps such as chamber larp or black box larp.

1. We will continue to make larps even more accessible, by integrating workshop techniques in the design in a way that will help more people overcome the anxiety of participating

2. We will make even shorter formats to permit more people to play. Just like short key notes or formats like pecha kucha are gaining popularity on the expense of long talks, we will find even shorter larp formats. Tabletop roleplayers have «roleplaying poems» that can be played in 15 minutes. I don’t know how, but I’m sure we will also have an eqvivialent in larp.

3. Manuscripts will be attributed to author rights, that will provide royalities, which will make one more stepping stone in making it possible to live professionally from larps

4. And larps will start adapting other larps. In his Nordic Larp talk, Evan Torner spoke about adaption litterature or films into, but we will also see, just as in the theatre, that reruns will use LARP manuscripts but use their own adaptions, such as changing the setting but keeping the story.

I strongly recommend the read. And while waiting for the video of the talk to be released, head over to Alibier!

Larpfund is a player driven initiative and fund to support greater diversity in larping. We help organisers subsidise tickets for those who need them.

We believe that the nordic larp community should be accessible to everyone and that we, as a player community, are the ones responsible to make this a reality.

Larpfund is an amazing initative in which you can donate monthly or as a one-shot to a fund which larp organiser can apply to. The money is then to be used to subsidise the tickets to their larp. Currently only operating in the Nordic countries.

At the larp conference Knutpunkt 2014 me and Rasmus Høgdall hosted the session Social Media in Larps, in a combination of presentation and panel. We provided some of examples of how people have been using social media in connections to their larps, both for off-game and in-game use.

END_OF_DOCUMENT_TOKEN_TO_BE_REPLACED

Oliver Nøglebæk is a great mind and fortunately for the community, also a larper. He has put together a great list of links as a primer for Nordic Larp. Check it out!

“I realized I didn’t have a good starting point for new folks to learn more. What I mean is, that the information is out there, but it’s scattered across a lot of different places.”

Knutepunkt is a Nordic conference for larp and today is your last chance to sign-up for Knutpunkt 2014. The event is will be held in Halmstad, Sweden 3-6 April. Before that there will be several activities during A Week in Gothenburg (AWiG) such as Nordic Larp Talks on Wednesday 2nd April.

I have attended the Knutepunkt-conference since 2008 and I warmly recommend a visit as you the most amazing people from all over the world.

In the workshop we also did a lot of freeform scenes within the playgroup. For the characters we did scenes from the past, the future and “what if”-scenes. This turned out to be very strong.

We had a black box, which was a simple room, where a game master would help you set up the scene you needed.

Emily Care boss interviews Anna Westerling, larp designer and organizer of Stockholm Scenario Festival. Read up on Annas thoughts about the festival as well as her views on game design and the history of Nordic freeform and black box larps.

When do we know if the choices we make are the right ones and what should we really do with our lives? During a few hours, twelve players dive into the stories of Agnes, Markus, Olivia & Thomas to meet them during three stages of their lifetimes.

Blackbox Malmö is an organization hosting and promoting short larps in the Malmö-region in Sweden, in January they organized The Kick Inside.

END_OF_DOCUMENT_TOKEN_TO_BE_REPLACED

From the larp Halat hisar. The pacifists and more militant foreign activists are having a physical disagreement about throwing rocks at the enemy soldiers. Ingame. Photo: Tuomas Puikkonen (CC-BY 2.0)

How is life under occupation? A team of Finnish and Palestinian organizers created the larp Halat hisar, which took place in a modern day Finland under a fictional occupation. The project was well documented with photos by Tuomas Puikkonen and in this post your will also find some thoughts about the larp by players and organizers.

END_OF_DOCUMENT_TOKEN_TO_BE_REPLACED

Nordic LARP is a fascinating medium and we would encourage Serious Games designers to have a look at it from the perspective of education and learning. It offers a different view to learning and education and could be what we are all looking for.

Serious games  is a term for games that serve another purpose than only to be entertaining, such as an education game. On a blog post at GALA – The Games and Learning Alliance three researchers from the Heriot-Watt University discuss if serious games and AI technology could benefit from Nordic Larp. Thanks to Jaakko for the tip.

During the fall my collegues from LajvVerkstaden made a one week introduction to Nordic Larp and edu-larp the GALA-researchers in Edinburgh.

Nordic LARP, should the Serious Game community think about it?

The Swedish campaign Krigshjärta (Heart of War) is known for running great war larps several times a year. Every other summer a bigger event is held, and this year it was Krigshjärta VI. In this post you will find some stunning photos from the larp as well as concept art inspiring the participants into making all the amazing costumes and gear that makes Krighjärta come to life.

END_OF_DOCUMENT_TOKEN_TO_BE_REPLACED

The 2012 Swedish run of Mad About the Boy. Photo: Electro-LARP

I myself have been very sensitive about the game, but what makes this the larp rich is precisely that larps are a great vehicle for science-fiction. The reflection created by the game about gender, masculinity, femininity and cultural construction is fascinating and it’s not a message delivered on a plate by an author but a group reflection that emerges from the larp .

French Baptiste Cazes has written a three piece review about the larp Mad About the Boy. The first part describes the context of the larp and his preparations. The second about workshops, transparency and the game design. In the the third and last, Baptiste describes the use of the black box and the debriefing methods.

The articles have been posted and translated by Leïla Teteau-Surel at the French larp blog Electro-LARP, a site in English for larp news from written weekly by the French community. The original articles are to be found at Electro-GN, which is the French language parent of Electro-LARP.

For further reading, here is the review by Thomas B.
And finally. The larp will be played in France 2014. Don’t miss out.

From a gameplay point of view, MatB proved me that yes, it was possible to have fun roleplaying daily life: no complicated plots, nothing to hide or save, just living life as someone else. Of course everything was more interesting because I was trying to do it «as a woman» but still, it worked.

Read the larp review of Mad About the Boy written by Swiss larper Tomas B who participated in the Swedish run, during the summer of 2013.

Grenselandet is a great short larp festival organized in Oslo by Fantasiforbundet. I visited this year hosting my larp Papers, as well as playing Hirelings and Sarabande. I also attended the  launch of the book Larps from the Factory. I also got the chance to get some thoughts about the history  of Grenselandet and what is has become by the main organizer Martin Nielsen.