Participants gathering before the start of scenarios in the big black box at Skarpnäck Culture House. Photo: Petter Karlsson

Stockholm Scenario Festival was a three day event packed with loads of play with the goal of combining both freeform games as well as larps. I had the chance to attend several scenarios and I also did some video interviews with participants. For this post I also got a comment from Anna Westerling who was one of the main organizers. Hopefully, Stockholm Scenario Festival marks the start of a tradition.

In 2008 the convention Höjdpunkt was held in Sweden to join the traditions of freeform scenarios and short larps. Coming from a background of playing longer larp, this was a turning point for me. I really could see the beauty in being able to play short and scenarios that really can to affect me as a player. Either emotionally strong or just being something really fun and enjoyable.

Since then, many festivals and events such as Knutepunkt, Prolog and Grenselandet have hosted scenarios short larps as well as freeform games. Now this year, at Stockholm Scenario Festival many of the older well known scenarios had been collected together with new black box larps. To top it all the Festival held the the Rising Stars initiative, with 6 completely new scenarios that were written for the festival. Together this made the program very rich.

The festival was held 1-3 November in Skarpnäck Culture House in Stockholm and had 130 participants from 6 countries.

If you want to learn more about the history of freeform and black box larps in the Nordic countries I think you should read Anna Westerling’s article Naming the Middle Child which you can find in the Knutepunkt 2013 book, Crossing Theoretical Borders – available free online.

During the last day of the festival I got hold of a few participants and one of the organizers to hear their thoughts about the weekend.

There were more 28 scenarios available to play. I co-hosted one and attended three others. You can find and download all the scenarios here.

The day before yesterday

After death people go to a place outside of life. There they meet friends who help them remember what their life was like, what kind of story it was. Players use pictures as inspiration to create scenes from different life stories. Together they extract the story from each life.

In this scenario by Swedish Kajsa Greger I portrayed a sad figure who looked back on his life and maybe saw some light in it after all. A very mellow and emotional scenario which we unfortunately had a bit to short time to play, but it was a really nice experience. 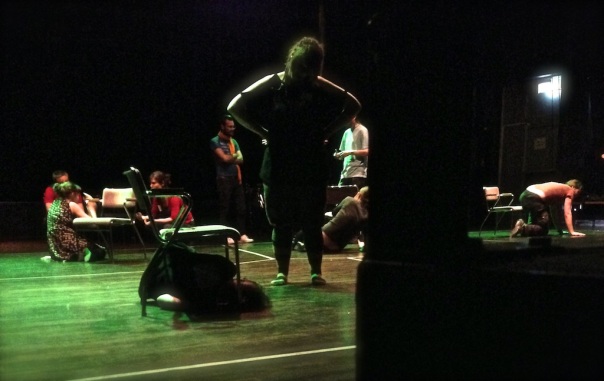 A fast paced game inspired by the movie director David Lynch. We use music, light and meta techniques to construct a story like no other. The game is divided into scenes and we travel from despair to hope, from love to hate, and back again. What is the difference between the winner and the loser, and what happens if we turn it all around?

Joel Östlund has written a great black box larp that also was played on Prolog earlier this year. I was very glad to get the chance to play it but of course even more happy when the experience turned out to be fantastic. It is packed with smart techniques and smart design. Also the use of light and music made this to a fully fledged black box larp. I hope to see more of this!

“Your body is a temple”, says the bible. The big question is what happens to us when we no longer possess the control of our own bodies. This is a game about losing control, about oppression, about fighting back and about the bittersweet yearning for freedom.

In Your Hands is a scenario written by Karin Ryding which has a heavy emphasis on using physical play to show oppression. It has many similarities with very physical shadow play.

As contact improvisation dancer and one who likes physical play, this scenario was right up my alley. I do think It could use some design improvement but generally the idea is really interesting and just great since it is a lot about feeling with your whole body.

A game about being a teenager. About fitting in. About knowing your place in the hierarchy.  You’re in high school, you know who you are, what your position is, and most importantly; who you want to be. Bring every ounce of angst, happiness and hormones from when you where 15 into a teenager of today.

I have had the plan to organize it in Sweden for a long time but instead I know got the chance to co-host it with Frida Sofie Jansen who held the larp at Stockholm Scenario Festival.

Play the Cards is a really great and fun teenage angst-drama but instead of ending there, it uses playing cards to marks both status and group for a character. A brilliant system that I finally had the chance to try. Also, it was a blast cross-playing gender as the character “Maria F – Bitch Twin 2 – 10 of Hearts”.

I asked Anna who was one of the main organizers to share some thoughts about why the festival was started.

Stockholm Scenario Festival aims to start a tradition of playing and writing short freeform games and blackbox larps in Sweden. We realized there were a lot of great games out there in the world that a lot of Swedes hadn’t played – we wanted to bring them home.
We also wanted to show that while the blackbox larping and freeform role-playing tradition comes from two different traditions they are very close and there is no reason they shouldn’t be on the same festival. Even thought one of them say the do it “semi-larp” and the other one say the do it with “meta-techniques” they are still both in a room telling and interactive story together.

We also chose to focus on tight stories to ensure that no player would be left out and everyone would get a great experience.

To encourage new writers we had a writers challenge called rising stars from which we had 6 brand new scenarios written for the festival. With in total 28 scenarios in three days the festival was design for dissatisfaction. Our reason for this was so that everyone would go home and wanting to play all the games they didn’t have the opportunity to play. All the scenarios are therefor available for download on or website for all to play with their friends at home. This so the festival wouldn’t end just because the festival it self ended, but rather continue on in people living rooms to deliver great gaming experiences. You can download the scenarios here: scenariofestival.se/scenarios

I love the idea of having a classic scenario track at a convention where I can play the awesome games of yesteryear that I missed the first time around. Maybe just a few more opportunities for chatting over beer next time around? Since this festival is only in its first year, there are plenty of times to make adjustments. Would definitely larp it again.

Then there’s a smattering of the surreal, fantasy, relationship dramas, awkward sex, art and more. For sure, it’s a varied playlist. But I’m stuck with this feeling that there’s a certain overweight of the dark.

Snarglebarf – What’s up with all the angst?

As I said before the freeform scene had died in Sweden in 2003, so there was none happening. As I began going to Fastaval in 2009, of course the idea came up to bring this back to Sweden as well. I had played so many great scenarios abroad that Swedish larpers and roleplayers would love, but didn’t even know existed. I wanted to bring them home.