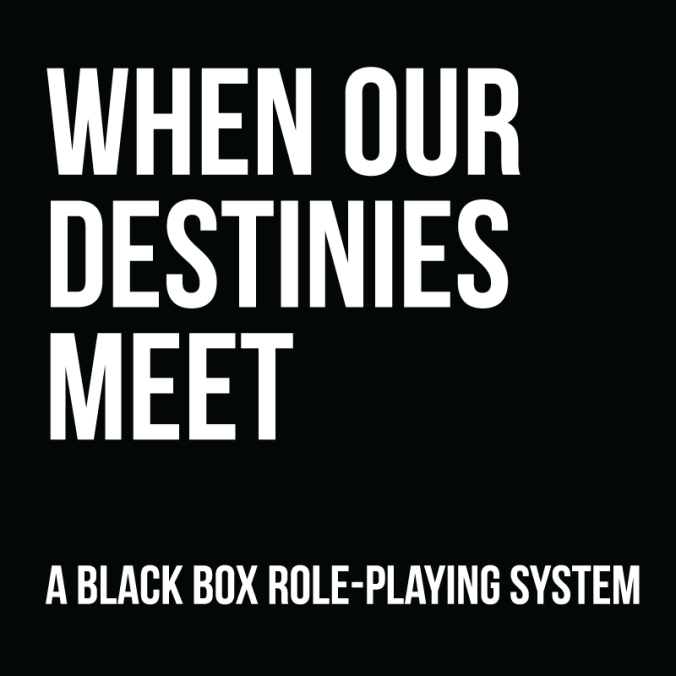 Together with Morgan Jarl I have written the larp When Our Destinies Meet. It is not really “only a larp” – it would be better described a system for creating short larps.

As we want the larp to be spread and used, we have licensed it under a Creative Commons Attribution 3.0. We want people to use and remix the system as it finds them best.

What is a larp? Check out my lecture from this spring from Stockholm Academy of Dramatic Arts.

When Our Destinies Meet
A party. A predestined meeting. A web of interlacing stories. We gather our inspiration from the director, playwright, and theater theorist Bertolt Brecht: his acting theory of Verfremdung and Haltung; his aesthetics, which were made widely known through the films Dogville and Manderlay by Lars von Trier; and his concern with social problems, morality and relationships.

When Our Destinies Meet requires 2 hours of preparation and 2 hours of black box larping, which uses theatre techniques and shifting perspective as the player, director, narrator, and audience. Using a model where larps are created by the participants in workshop before play, you should be ready to hash out some relationships and plots. The only story components and preparation we have as we enter the game are as follows: a party, social roles and, one or more destined meetings. We decide these three factors together during the workshop. First, we spend approximately 2 hours to create the drama, the game, and the relationships; then, we play for approximately 2 hours with a 30 min debrief. That is the total structure of the game and its preparations. A game to go. Out of the box larping.

The movie and the pictures are from November 2010 where we produced When Our Destinies Meet at Grenselandet Kortlaivfestival in Oslo. The pictures where taken for an article that was written by a reporter taking part in the game, you can find it here (in Norwegian).